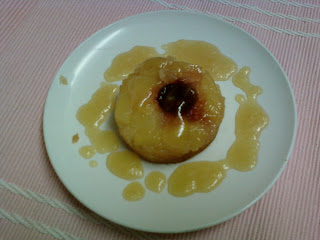 Pineapple Upside-Down Cake is an easy standby dessert for just about any occasion. It's dependable, reliable and virtually guaranteed not to fail. No big surprises with this cake
that's been around forever.

Leave it to Rose to up the ante with her newest version of Individual Pineapple Upside-Down Cakes. These gems shine in a class all their own. Innocent looking little things packed with sun shine, perfect for January's cold, dreary weather.

Needless to say, I wasn't too terribly excited about this week's HCB choice. Okay, I admit, I might have needed the tiniest bit of an attitude adjustment, especially after reading the directions included making dreaded sugar syrup and the even more dreaded caramel, which tend to turn themselves into new atomic crystal formations under my spoon wielding hand.

Slicing the pineapple was a bit tedious and it wasn't quite as sweet as they normally are. Is it pineapple season? I don't know anything about pineapple season other than Jen from Hawaii, who is our physical therapist turned masseuse, has her mother air freight pineapples over because, she claims, they in no way resemble those in a supermarket. I thought a lot about Jen from Hawaii whilst slicing this subpar pineapple and pulling out those thorny little things, curiousity growing by the minute as to what a "real" pineapple tasted like in comparison. I started resenting my Dole Gold, wondering if it was up to task.

Despite my blunder in adding 1/2 cup sugar instead of 1/3 with the butter and lime juice for the top/bottom/no really the top, I am happy to report it caused no major catastrophe. This is the first time I've baked with Raw Sugar turbinado. The crystals are huge.

FYI-I have seven, that's SEVEN, kinds of sugar in my cupboard now.

Oddly enough the most difficult ingredient to find was a can of pitted sweet cherries. Canned cherry pie filling was on every store's shelf as was sour cherries. I must say, I get into the most interesting conversations while out searching for ingredients or pans for Rose's cakes. It surprises me A) how many people do not know about her new book B) how many people go absolutely over the moon excited about all of us scattered around the globe baking together.

Mixing the batter was easy enough and this is the first cake I've made which uses yogurt. I opted to use ramekins I received as a Christmas present three or four years ago.

While they baked, I made the pineapple caramel sauce, holding my breath it would not crystalize before my eyes. I was left with one cup exactly of pineapple juice after pureeing and straining the remaining pineapple bits. If it seized, I was out of luck.

Stirring a pot of sugar affords one a great deal of reflective time, or time to pull one's hair out, and then I heard the sweetest sound of a dove cooing. I couldn't believe the angelic aria lilting softly through the overhead stove vent. It was such an unexpected gift while watching for signs the bubbling brew had turned an appropriate shade of amber. I was horrified the instant read surpassed 140 degrees. Since I overlooked heating the remaining pineapple juice, it did not bubble up furiously when added to the sugar mixture. Luckily, it still turned into a delightful pineapple caramel sauce.

I heated orange marmalade and strained it for the glaze because I was not about to go back to the store for apricot preserves. Putting the little cakes together, I honestly didn't expect much.

It's always such a momentous occasion around here when a new HCB recipe is ready for tasting. I could barely hold them off for one lone picture, which surprised me, as no one in my house is particularly crazy about pineapple upside cake. Each taste tester proclaimed it was without a doubt the best pineapple upside down cake they ever had.

And I absolutely agreed, with or without just picked pineapples flown in from Hawaii. But I will make Jen from Hawaii an offer of she won't be able to refuse when her next crate of pineapples jet in.