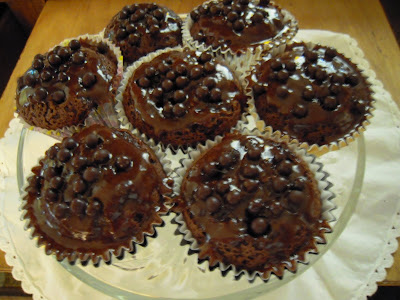 Designer Chocolate Baby Grands are charming cupcakes made with the German Chocolate Cake recipe  in Rose's Heavenly Cakes.  It has become my absolute favorite cake.  She makes use of it in other recipes, most notably, Chocolate Ice Cream Cake,  and now these sophisticated cupcakes.

More than any other chocolate cake recipe, this one hits the spot.  It reminds me of a funny anecdote in  "Cooking for Madam,  Recipes and Reminiscences from the Home of Jacqueline Kennedy Onassis" by Marta Sgubin .  Marta was forced to divulge her secret recipe to Mr. Onassis, the Greek oil shipping tycoon, who employed world class chefs around the clock.  He loved chocolate cake so much there was a standing order for one to be served every day, at every meal.  As a surprise Marta, then nanny for a young Caroline and John, decided to make him a chocolate cake herself.

"Having no clue how to bake a cake, so to be sure that I wasn't missing anything, I bought a Duncan Hines mix."

It was served with dinner and the butler informed Marta that Mr. Onassis wanted to speak with her, immediately.

"This is the most wonderful cake I ever ate!  How did you do it?  I want you to give me the recipe for my chef."

From that moment on, shipping boxes of Duncan Hines chocolate cake mix were sent to homes around the world and the yacht.  Mr. Onassis was never without, much to the consternation of his personal chef, who got very upset, saying it was "powder.  I can't cook with powder."  When Mr. Onassis heard, he simply said "I don't care.  This is the chocolate cake I like."

I completely understand.  I never thought any cake made from scratch could equal a Duncan Hines with its  undefinable flavor and unique crumb that makes it flawless every single time.  Until now.  I can only imagine Rose's recipe would have delighted Ari Onassis.  And his chef. 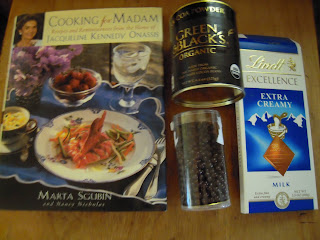 These ultra chocolate cupcakes were conjured up with Green and Blacks cocoa powder, Lindt Extra Creamy milk chocolate in the glaze and Valrohna chocolate perles for the topping, which Rose suggested as a suitable option instead of her infamous chocolate lacquer glaze.

First things first:  conquering scale phobia and sifting confusion.  The irony is not lost on me that I use an archaic, bowless Weight Watchers scale for making these Heavenly Cake recipes. I can't sift fast enough before it shuts itself off.  I try to start out with a clean and tidy kitchen; however by the time I am finished weighing and sifting, the kitchen is a white disaster zone, myself included. Weighing filled me with dread and confusion  until last week.  Mendy's post clicked on a light bulb.

"Even if you were to find fanaticism in didactic measuring a fault you can't beat the ease of just pouring straight from the box into the mixing bowl."


But of course!  Thumping myself on the forehead, I had a V-8 moment.  Weighing flour  into a bowl on the scale, then pouring  the flour, etc through a fine mesh strainer suspended over the mixing bowl, effectively sifted without a flour blizzard.    It worked perfectly with the cocoa powder as well.  This is the beauty of baking with the HCB group; having little "aha" moments.  A more lucid moment would be to go buy myself a new scale.


I still didn't understand if it was necessary to sift before and after weighing, or only before  or  perhaps only after.  To sift or not to sift, that was the question weighing on my feeble mind.  So I did what any eccentric person would do and emailed Rose.  Bless her patient baking heart, she replied back. 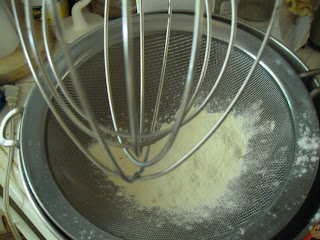 Here, fellow bakers, is the definitive answer: Sometimes it is necessary to sift before and after measuring.  If so, it will be specified in the recipe.  In other words, I should read carefully, wear glasses while I'm reading and believe what I am reading, instead of transposing instructions for volume to weight.


The chocolate designer cupcakes were baked in individual silicone cupcake molds with foil liners.  I've been eyeing these molds for quite sometime to use for recipes with extra batter.  It was a difficult decision;  these cute shapes or ones with feet. 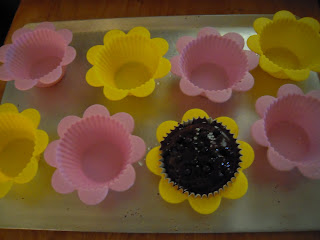 I should have known to double the recipe.  They are a definite hit with the unbelievable chocolate glaze and perles. 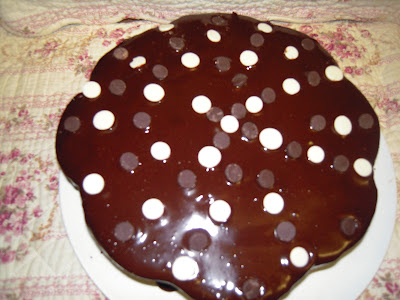 This cake is a complete surprise!  Light, moist with delicate banana undertones and dark chocolate ganache garnished with chocolate chips. The name conjures up a muscle cake; dense, heavy, in your face. Instead it is light as a feather. 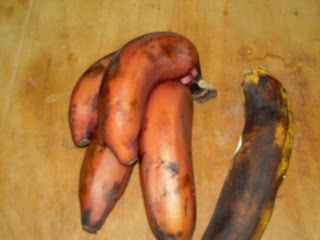 Red bananas have taunted me for quite some time in the grocery store.  Too exotic looking for Cheerios, I impulsively bought a bunch for this cake.  They are milder, creamier in taste compared to the regular bananas we have grown up on.  There are more than 500 varieties of bananas in the world, yet all my local grocery stores carry only three.  I can't help but think we in the U.S. are missing out on something. 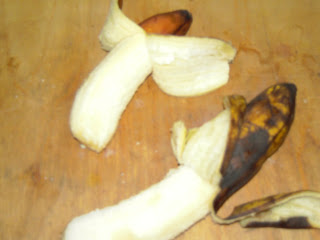 The cake itself was easy to mix up, now that I've finally figured out I was doing the whole scale thing backwards.  Curiosity struck with the cocoa powder.  I first did the scoop and level, then weighed it on the scale.  There were more than two extra tablespoons by weight.  This makes me wonder if extra cocoa powder contributes to a dry cake?  If I knew how to do cocoa to water ratio, I would.  Nicola, spread sheet wizard, are you back from Greece?

I halved the ganache recipe; pouring half the warm mixture over the top like a glaze, let it set awhile, then poured on the rest.  The thin layer of ganache let the cake shine through.  The dark chocolate and white chocolate chips are fun and I tried to make a rose with them, but alas, no artistic talent.  Next time, I'll melt the white chocolate and drizzle it over the ganache.  This really is a lovely cake. 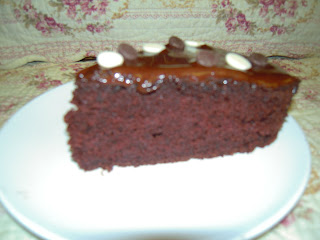 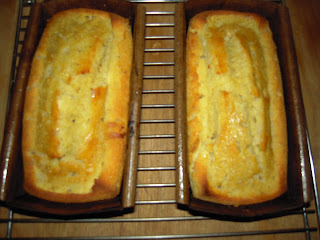 This little pound cake is amazing; buttery, tender and infused with loads of vanilla flavor.  Vanilla bean really elevates this edible gem into a class all its own. There is one and only one problem with Rose's Mini Vanilla Bean Pound Cakes......next time I should quadruple the recipe.  Before I knew it, everyone sliced seconds!

The neighborhood cake decorating store received a shipment of paper baking pans.  They were rather excited I bought a pack. The owner gave me a sales pitch on how useful the various sizes and shapes are for taking baked goods to an event and not having to worry about bringing a pan home.

These pound cakes, however, never stood a chance of leaving my house.

Not certain how to use the wobbly things, I slid them under a half size cookie sheet.  It was then I noticed a paper had fluttered to the floor.  Thinking it might be a recipe, I actually ended up reading the instructions.  It was a good thing since not only was the cookie sheet called for but a lower temperature and reduced baking time, as well.

I stressed myself out all week over buying a bottle of Vanilla Cognac.  After learning it is brandy, it seemed like a good opportunity to use the peach brandy sitting in my cupboard from a past Heavenly Cake recipe.  First off, I doubled the syrup to make certain there was enough to macerate peaches after following Raymond's suggestion of putting the remaining vanilla bean pod in the syrup.  It truly enhanced the taste.  I brushed it on before adding brandy since children were eagerly awaiting a slice then poured a bit of peach brandy into the remaining syrup with peaches.

My granddaughter requested ice cream alongside her slice.  This cake is so spectacular it doesn't need anything else but with ice cream and boozy peaches, let me say it takes it to another level.  It is definitely on the make again and again and again list, which means, I need to buy proper mini loaf pans. 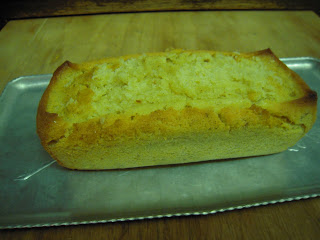 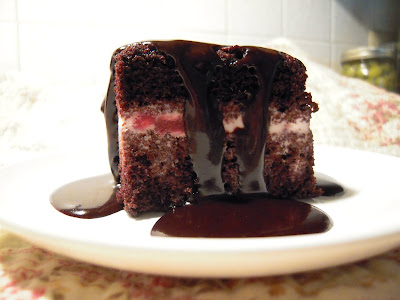 Look out Baskin Robbins, this may be the best ice cream cake ever.  Commercial ice cream cakes are generally gussied up under questionable "frosting" and decorations.  The list of ingredients impossible to pronounce.  And "cake" is a relative term. Rose has elevated  ice cream cake to a whole new level.
It's practically health food!
Rose makes use of her amazing German Chocolate cake recipe as the base for this ice cream confection.  It is my newest favorite dark chocolate cake, to date.  The agonizing part was patiently waiting the requisite eight hours after the cake was split and layered with ice cream to properly freeze.  Drizzled with  decadent Chocolate Snowball Hot Fudge Sauce, it was well worth the wait. 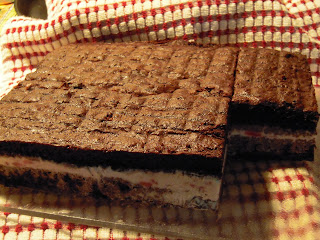 I baked the cake in a 9x13. The biggest difficulty in putting this cake together is choosing which ice cream flavor to use.  Strawberry won out but the thought of layering several flavors crossed my mind, as well as, buying twenty different flavors in the mini cups and turning the whole recipe into cupcakes.
Rose's recipes seem to shine, simply because she does not mask flavors.  Lindt 90% and Valrhona cocoa powder went into the cake and sauce.  The chocolate sauce was especially easy to make; my nine year old granddaughter made it entirely on her own.  This cake is definitely a new family favorite. 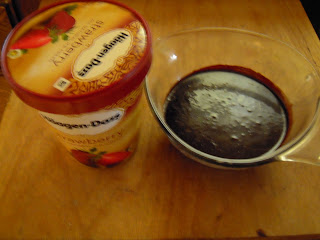 Here is a charming post on hosting a cooking themed birthday party for kids.  While a great idea for a birthday,
it's perfect anytime.  Children are usually so grateful to have a chance to get their hands in some flour.  Even a bit of dough will keep a child entertained.  A very smart waiter at Il Fornaio gave my very young granddaughter pizza dough to play with while waiting for dinner to arrive.  After pummeling that bit of dough into countless shapes, she brought it home, baked and then painted it.  Looped with a ribbon, that pizza dough hung on the wall for years.

http://www.simplebites.net/encourage-kids-to-cook-by-hosting-a-cooking-themed-birthday-party/
Posted by Vicki at 8:47 AM 4 comments: