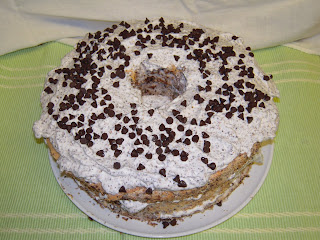 Rose, the Queen of Cakes, has rescued the light and airy angel food cake, bringing it forth into a new century. Angel Food Cake used to reign supreme; luncheons, bridge parties, summer evenings. Somewhere along the line her popularity came to an end. Not even packaged boxed varieties make it into many shopping carts these days. So sad. It is among one of my earliest childhood memories; sitting on the kitchen counter watching my mother magically whip up an angel food cake.

Chocolate Tweed Angel Food Cake is about to change all that. If you are among the few who have made angel food cake, be prepared to be surprised, this is a change from the typically tasteless variety. For those of you who have never made an angel food cake, of which I was one, Rose's recipe is simple to follow.

The main thing to know is unlike other cakes, an angel food cake requires the pan to be ungreased, un-parchmant papered, un-anything. It needs the surface free which allows the batter to adhere to the pan, guaranteeing height.

Rose gives fair warning that a bottle with a long neck must be made ready for the moment the cake comes out of the oven. It must be secured upside down to cool.

Here's the thing about a cake balanced precariously on a bottle for an hour and half.......little fingers can't resist twirling it around hoping for a crumb or two to accidently fall off. And here's the thing about finally turning this cake right side up and having to let it set for another hour....little fingers absolutely suffer having to resist pulling off a wee bit of crumb or two. Add to all this misery a huge bowl of whipped cream and the suffering in my house has never known such bounds.

There was nothing difficult about putting this cake together, other than going through two dozen eggs hoping for the requisite 18 whites to separate unscathed.

I didn't frost the sides with the whipped cream, opting for a more rustic look. My taste testers' verdicts split down the middle. Everyone agreed the cake was delicious, especially since this is the first homemade angel food they've had. The light, airy texture is such a contrast to a ready made bought for summer strawberries.

The difference was in the chocolate preference. My only conclusion is some are more sensitive to the bitterness of unsweetened chocolate. Next time I will use 85%-90%. I am definitely going to try the vanilla bean version with maybe butterscotch or cinnamon chips "pelted" on top. Really, this recipe alleviated any trepidation I had about making angel food cake.
Posted by Vicki at 8:19 PM