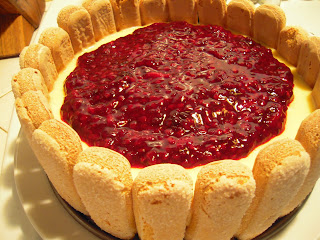 Cranberry Crown Cheesecake lost out to Marionberries when I spied them in the freezer at Whole Foods.
The lure of Marionberries was too much, even though 'tis the season for all things cranberry.  And figgy pudding.

I thought about making the Ladyfingers, really I did.  But that would entail me ferreting through a cupboard for the proper piping tip.  I wasn't up to the mental task.  Christmas, I have come to accept, is for the young.  I don't remember taking so long to recover from commando shopping expeditions, marathon wrapping sessions, helping Santa fill stockings in the dead of night only to be awakened by eager children who could barely wait til dawn's early light.  Except there was no light at five a.m.  Just deafening cheers of  "Santa came! Santa came!"  Yes, yes he did.  Unlike the year he may have zealously slept and therefore neglected the filling of stockings.  And Santa has never lived down that year. 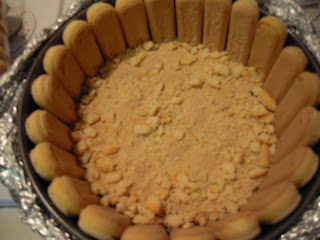 The Salvardi Ladyfingers were good little soldiers and lined up cooperatively. The bottom of the pan was lined with the tips and for good measure, an extra layer of crushed cookies.  The cheesecake mixture was probably the easiest cheesecake I've made, especially since I neglected to read the fine print to actually add the sour cream sitting in the refrigerator.


Which may account for the decidedly shallow depth of filling.  Into the oven in a nice warm bain Marie and two hours later a lovely sour creamless cheesecake emerged.   It's always a moment of truth, opening up the foil chanting "Please let it be dry. Please let it be dry."  Could a football touchdown score more enthusiasm than dry foil?  I think not. 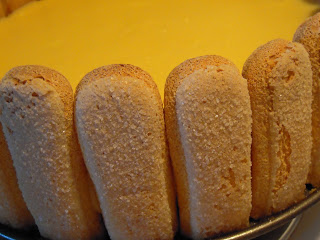 Sorely lacking in patience, the hardest part for me is waiting for something to cool.  Or set.  This was no exception. 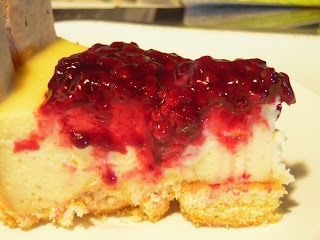 There's no way it was going to get a final 24 hour rest in the refrigerator.  We bravely took our chances.  And even without the sour cream, this is one fantastic cheesecake.  Rose really knows cheesecakes.  Every single cheesecake we've made has been fantastic. The marionberries set it off nicely.  Very very nicely.
Posted by Vicki at 1:59 PM 6 comments:

FYI
The pictures keep half disappearing. If anyone knows how to fix this I'd be very appreciative. 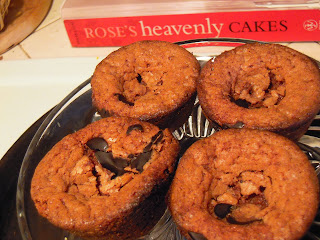 These are good, really good.  Even with the mistake of leaving the cream out of the ganache.  I must learn to pay attention to how many servings these desserts make because it made six.  Six!  I would have doubled it.  Suffice it to say there is much negotiating amongst the populace on who gets what.

Fruitcake has to be my most favorite cake to make.  Maybe it's the cheery glaceed fruit tumbling around in rum for weeks on end.  Or the toasting of the pecans and walnuts.  The simple ingredients that feel more like a craft project being assembled together than a dessert.  I love the crunch crunch sound the Kitchen Aid makes with the final stir up.  Most surprising of all is how Rose's fruitcake recipe puts all fruitcake jokes to shame. 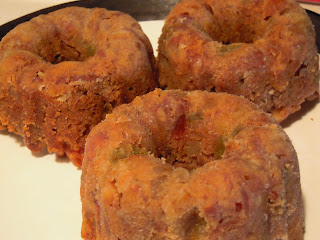 I opted for little mini bundt cakes with the intention of handing a few out as gifts, along with Joe Pastry's fruitcake story and a sweet little book, The Best Christmas Present in the World, which is actually based in fact.  Hopes were high, especially as the amazing new Instant Read Thermometer Prize from across the pond takes this temperature business to a whole new level.  I'm hooked!  Leaving it set to Celsius instead of switching it to Fahrenheit is giving the girls a chance to understand measurement differences.  Hopefully it will demystify it a bit so chemistry won't seem so daunting down the road.

My fruitcakes were thwarted two fold.  A) I forgot to turn down the oven twenty five degrees for the dark pan.  Blast!  Not completely burned but a bit over done.  B) The pans on the upper rack was unbeknownst to me, precariously perched.  My husband, who never quite understood the odd way the racks slide in for safety, shoved it in.  When I pulled the tray of individual molds out, they literally went to rack and ruin on the floor.  Poor little things!  A moment of silence was in order.  Still, the surviving cakes are delicious, didn't over bake and there's no way they'll make it to Christmas.

I did just watch  fruitcake being make on PBS in a spring form pan and it looked very promising for Rose's fruitcake next year.
Posted by Vicki at 5:08 AM 6 comments: 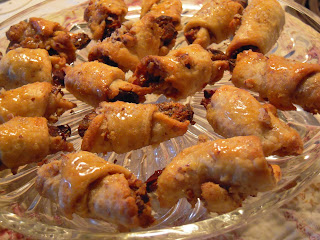 The Avid Bakers Challenge this month was Flo Braker's Maple-Pecan Medjool Date Rugelach.  This is the second batch because the entire first batch did not last long enough to take a picture.  Everyone loves these morsels.  The flavor faintly reminds us of Baklava. 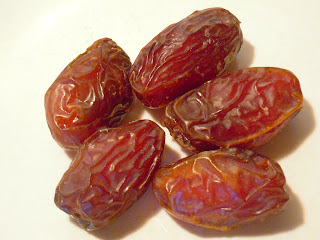 It began with a search for dates.  Not knowing anything about dates, I managed to buy the wrong variety. Medjools, I learned, are the King of Dates.  Whole Foods had some in containers and then I found these displayed in the produce section.  They were twice the size, plump, beautiful color and organic.  Organic?  Aren't all dates organic?  No, they are not, sad to say.  I paid a King's Ransom for these beauties and it was worth every penny.  They had just been picked a few days before.


My rolling techinque leaves a lot to be desired.  I felt like one of Kramer's Cubans. 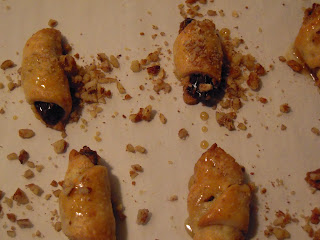 Luckily, it is not necessary to roll the Rugelach into a tight Dutch Master's Presidente to be delicious. 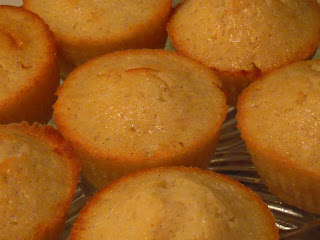 We don't need no stickin' financier silicone pans.  Well, actually we do, but I made due with silicone cupcake molds.  It made eight with one casualty slipping off the rack whilst coming out of the oven.  Does the five second rule hold?  I may have cried.  This was a lot of work for eight tiny cupcakes.  Next time the recipe will be doubled.

I used vanilla bean paste for the first time with these little gems.  Interesting stuff, not at all what I expected, quite runny.  The few ingredients went together easily.  Rose clarified the unusual dough texture and I'm very glad she did, otherwise I would have beaten it far too long. 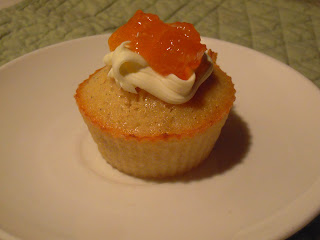 Topped with a dab of marscapone and apricot jam, these were delicious.  Everyone very much enjoyed them and go on the Make Again List.
Posted by Vicki at 10:14 PM 4 comments: 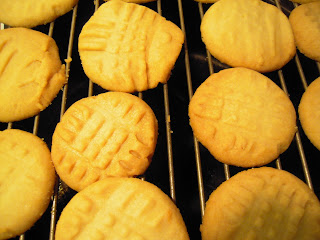 Rose's Christmas Cookies has a recipe for traditional Scottish Shortbread.  After reading the charming history of mixing shortbread by hand, I told my granddaughters to scrub up.  I wish I had captured the looks of utter and complete surprise mixed with unbridled joy at the prospect of getting to put their hands straight into dough! 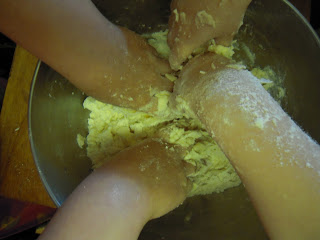 "Really?  We really get to put out hands into the bowl?" Yes you do!  An afternoon of fun with a few simple ingredients; flour, butter, sugar and powdered sugar. 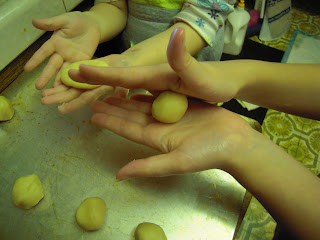 "Look grandma, we have an assembly line!"  One rolled and flattened, just as Rose instructed, the other then rolled them into balls.  Ah, but wait girls, there's more fun to be had. 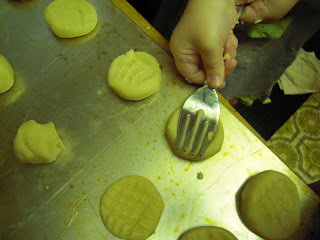 Dipping forks in water to press the dough was quite the adventure.   "They're waffled!"

If you have purchased Walker's Shortbread, these are very similar in texture and crumb, nice and light, not overly sweet.  Perfect with a hot cup of tea.
Posted by Vicki at 2:42 AM 4 comments: 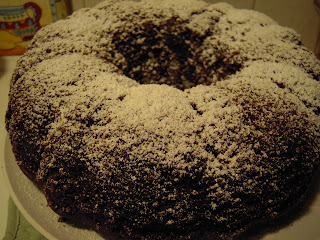 Rose's Chocolate Velvet Fudge Cake is an incredibly light crumbed bundt cake.  It was very easy to make.  The hardest part was waiting an hour for it to cool.  I wish I had pulled it out of the oven a few minutes early.  It didn't burn but the top, which became the bottom, was a bit too done.  No one complained and I was probably the only one that noticed. 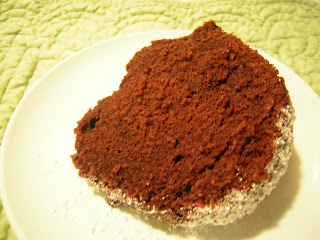 The cocoa powder was a mix of Green & Blacks and Valrohna.  It was interesting to see how much darker the Valrohna was compared to the Green &Blacks.  This is definitely one of those quick go to cakes, perfect for any occasion.
Posted by Vicki at 8:55 PM 7 comments:

I happened upon an informative article on butter and baking cookies.  Now I understand why Rose emphasizes the temperature of  butter in cake recipes.

Plus a delightful print of NY Times 1908 cookie recipes.

And for the final bit of cookie fun, Jacques Torres' chocolate chip cookie recipe from the NY Times.
Ginger Elizabeth interned under Mr. Torres which explains her preference for Valrhona chocolate disks.

I'll finally brave the cold and trek to the market for eggs to bake this week's Chocolate Velvet Fudge Cake.  I really miss having chickens.


July 9, 2008
Adapted from Jacques Torres
Time: 45 minutes (for 1 6-cookie batch), plus at least 24 hours’ chilling
2 cups minus 2 tablespoons
(8 1/2 ounces) cake flour
1 2/3 cups (8 1/2 ounces) bread flour
1 1/4 teaspoons baking soda
1 1/2 teaspoons baking powder
1 1/2 teaspoons coarse salt
2 1/2 sticks (1 1/4 cups) unsalted butter
1 1/4 cups (10 ounces) light brown sugar
1 cup plus 2 tablespoons (8 ounces) granulated sugar
2 large eggs
2 teaspoons natural vanilla extract
1 1/4 pounds bittersweet chocolate disks or fèves, at least 60 percent cacao content (see note)
Sea salt.
1. Sift flours, baking soda, baking powder and salt into a bowl. Set aside.
2. Using a mixer fitted with paddle attachment, cream butter and sugars together until very light, about 5 minutes. Add eggs, one at a time, mixing well after each addition. Stir in the vanilla. Reduce speed to low, add dry ingredients and mix until just combined, 5 to 10 seconds. Drop chocolate pieces in and incorporate them without breaking them. Press plastic wrap against dough and refrigerate for 24 to 36 hours. Dough may be used in batches, and can be refrigerated for up to 72 hours.
3. When ready to bake, preheat oven to 350 degrees. Line a baking sheet with parchment paper or a nonstick baking mat. Set aside.
4. Scoop 6 3 1/2-ounce mounds of dough (the size of generous golf balls) onto baking sheet, making sure to turn horizontally any chocolate pieces that are poking up; it will make for a more attractive cookie. Sprinkle lightly with sea salt and bake until golden brown but still soft, 18 to 20 minutes. Transfer sheet to a wire rack for 10 minutes, then slip cookies onto another rack to cool a bit more. Repeat with remaining dough, or reserve dough, refrigerated, for baking remaining batches the next day. Eat warm, with a big napkin.
Yield: 1 1/2 dozen 5-inch cookies.
Note: Disks are sold at Jacques Torres Chocolate; Valrhona fèves, oval-shaped chocolate pieces, are at Whole Foods.
Posted by Vicki at 8:23 AM No comments: 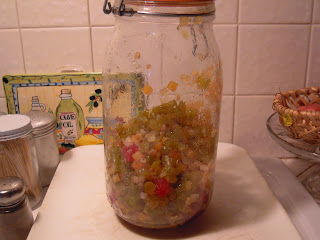 Who's making fruitcake this year?  Last year the Heavenly Cake Bakers made Rose's Fruitcake Wreath.  Honestly, I never in a million years thought anyone in my family would like this cake, let alone, love it.  They
constantly snitched those wrapped and resting in rum.  I'm not certain any of the fruitcakes made it to Christmas.

There was much merriment when I announced I was off to buy candied fruit.  That jar doesn't look like much, most of the pretty cherries are underneath the lemon and orange peel.  I have no idea why I find the daily turning of the jar fun, but I do!  And if you've never read Joe Pastry's tale of his father's annual fruitcake, it's a delight.
Posted by Vicki at 6:08 AM 3 comments: