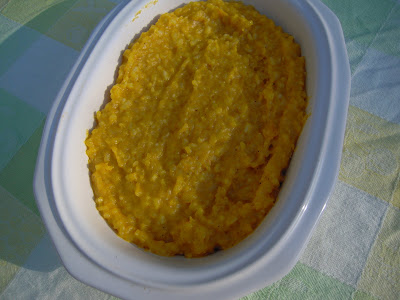 The first time I was served risotto, I had no idea what it was.  We were having dinner in Napa and the creamiest rice imaginable sat on my plate.  It took one bite to convince me it was the best rice on the face of the earth.  Still, I honestly thought it was plain rice mistakenly undercooked, yet it was soft and creamy. This was years and years ago, before risotto became the rage.

I have read many recipes for risotto but never mustered up the nerve to face a pot of rice, slowly, ladle full by ladle full, add broth and stir stir stir.  Well, after mastering lemon and orange curd, sugar syrups and persnickety buttercream,  I decided it was about time to overcome risotto phobia.  Besides, Rose has a recipe for risotto in her Celebrations book. If anyone could walk me through it, I felt confident she could. And she did!

The only thing that could possibly top being able to make risotto is going to Italy again and savoring risotto.
Posted by Vicki at 8:42 PM