Two Fat Cats Whoopie Pies and an afternoon with Rose 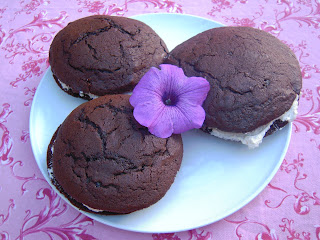 Two Fat Cats Whoopie Pies are a fun dessert.  Light chocolate cake with meringue filling that drives kids crazy with impatience waiting to eat one.  Adults like them just as much.

But you really don't care about the particulars of Whoopie Pies, now do you?  Be honest, you'd much rather hear about Rose!  I can't blame you one bit.  She is completely charming, even more so in person than in her videos, if that's possible.  It is.

But back to Whoopie Pies and judging by the way my eldest granddaughter went whooping up and down the halls like Daffy Duck, these "pies" are aptly named.   The ingredients were simple and straight forward: chocolate, muscavado sugar, flour, egg, oil, buttermilk, etc  I had Ghirardeli semi sweet chocolate on hand which didn't specify the percentage.   Very perplexing.  The cake alone would be fantastic paired down to a small cookie size.  I plan to make this recipe mini size next time.  The filling was not difficult to make except for guessing the hard ball stage.  My instant read thermometer does not register above 220 degrees and the sugar syrup called for 250 degrees.  I was surprised by the final texture; light and creamy verses typical spongy marshmallow. This was in a class all it's own. 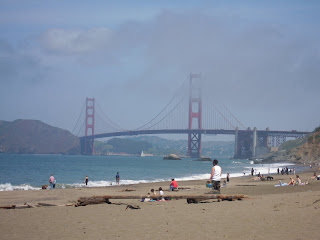 So how did I end up seeing Rose Saturday afternoon?  After Rachelino kindly posted about Rose's book signing in San Francisco, I was excited; it's only an hour and half drive.  The logistics of dealing with weekend traffic convinced me to skip it but eldest granddaughter had already packed for the beach and set her sights on Ghirardeli Square ice cream parlor after Golden Boy pizza for lunch.  There was no turning back.

We left home early for time to play at Baker Beach before the book signing and ran smack dab into the worst traffic jam I have seen in forty five years of living in this town.  The universty began celebrating Earth Day early with an annual picnic and over a hundred thousand people, according to the news, jammed the freeway trying to get on campus.  It took over an hour to go ten miles.  Luckily it was smooth sailing once past the university.  Not even the Golden Gate bridge was grid locked which was a miracle for a sunny Saturday.

It took massive willpower to tear ourselves away from the warm sand and crashing waves but the lure of Golden Boy Pizza is mightier than a sandcastle.  This pizza is like no other. It's made with foccacia dough that somehow is magically transformed by the foggy salt air.  The owner once told me the dough doesn't turn out as well on hot days.  I had to laugh at the realization not one of the many world class restaurants in San Francisco  has the power to entice us to eat anywhere else in The City by the Bay.  Not one, including COI which both Rose and Harold McGee highly praise.  I would go so far as to say if I had to choose between Golden Boy Pizza and Alice Water's Chez Panisse, I'd bid Alice adieu.

We made it to the book signing a little before three o'clock and  were completely astonished to walk into the small quaint shop packed with people sitting in chairs and standing against the walls. Surprised to discover Rose was scheduled to speak made it all the more special.  Lucky enough to land  in the front row,  I absolutely hung on Rose's every word, as did the entire room. 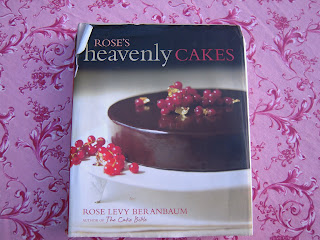 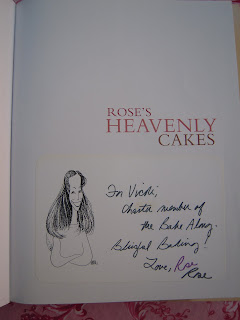 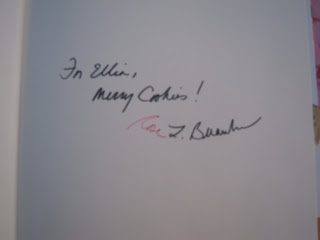 This is where I would insert pictures of Rose and Woody, except the camera was in the car.  I will tell you she had the whole room laughing hysterically with the revelation straws used for supporting  cake layers also provides the perfect opportunity to taste test a cake, like taking a geological core sample.  She also pointed out ingredients can be correctly added but if the oven temperature is off the texture will suffer. If the texture suffers, so does the taste.  Texture and taste go hand in hand.

She  answered questions from the audience and then signed everyone's spotless, pristine books.  Notice my book is neither spotless nor pristine.  When I handed it to her, she said "Oh, you've used this book!"  She signed her name by the original sticker.  And then signed a Christmas cookie book for my daughter.  Woody signed his picture as well. I didn't dare pull out the original cookie book from 1991 complete with children's first attempts at writing, the puppy's teething marks on the cover or the chocolate stains.  I had it with me, though.

This puppy, who was tall enough to reach the bottom row on the bookshelf, also teethed on Martha Stewart's Pies and Tarts.  Martha was not amused when she autographed it.  NOT AT ALL.  Which is funny as Rose told a story how Martha instructed her to get a stylist after Cake Bible came out because the pictures were "too perfect".  Rose herself did all the styling.  I was stunned to hear she had a difficult time getting the Cake Bible published as no one particularly believed in her.  I know, I think my brain short circuited hearing that!

It was such an enjoyable presentation. The entire room, crowded like a game of how many kids can fit into a telephone booth,  would have stayed til midnight listening to her speak.
Posted by Vicki at 10:17 PM