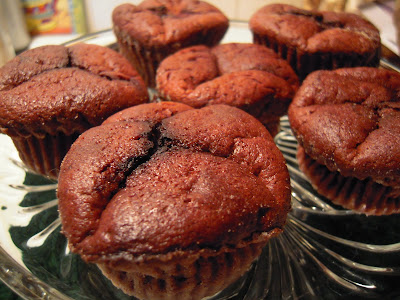 Molten Chocolate Souffle and Lava Cakes sounded like desserts I've often seen listed on restaurant menus but never ordered.  I really did not know what to expect. 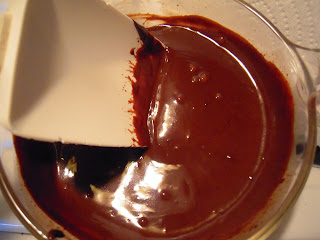 The recipe was simple enough.  First a ganache was made with cream and chocolate.  Poured into a plastic lined egg carton was not as easy as it sounded, though.  The plastic wrap got fiddly.  Still, it worked and into the frig they went for cooling. 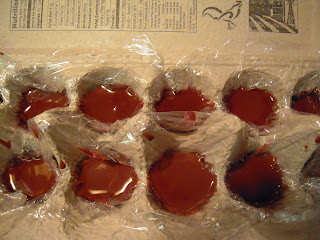 The cake batter consisted of few ingredients; chocolate, cocoa powder, butter. eggs and sugar.  Folded together into a fluffy batter, it was poured into silicone cupcake molds.  Rose said to only use Baker's Joy.  Oh, joy......No grocery store in my town stocks Baker's Joy!  I finally found some at Michael's craft store but was too lazy to drive to the mall.  I opted instead for the clarified butter and flour dusting method she suggested. 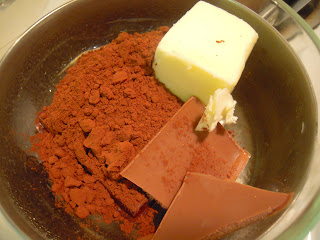 They baked fourteen minutes, as directed.  In my oven, it was a bit too long.  The house smelled incredible.  If I was staging an open house for sale, this is what I'd have baking in the oven! 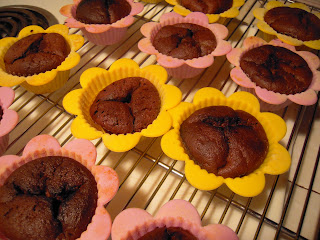 After they shrank away from the sides, they easily popped out of the molds to finish cooling.

I've never heard of non-stick aluminum foil, don't own a non-stick pan but it was unnecessary.  Placed in the frig on a regular plate, they didn't stick at all.  Maybe this was not a good sign.  Maybe it was an indication they cooked too long.

I was not fond of the coating left by the butter and flour.  I should have followed my own instinct and dusted it with cocoa powder instead.  Everyone kept asking if there was paper on the bottom that should be pulled off. 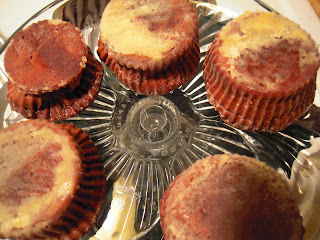 I finally took a knife and scraped the "crusty" bottoms. 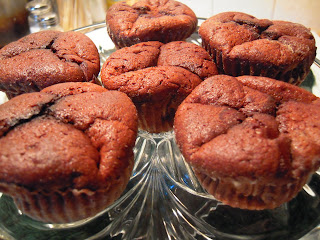 These are a nice little bite of chocolate but a bit too chocolaty for me, which is ironic since I'm the Queen of Dark Chocolate. Next time I'll go down to 50% chocolate for the batter and lighten the ganache with milk chocolate.  I started referring to these as Two Bite Brownies and let me tell you, everyone else loved these things.  Go figure.
Posted by Vicki at 8:20 AM