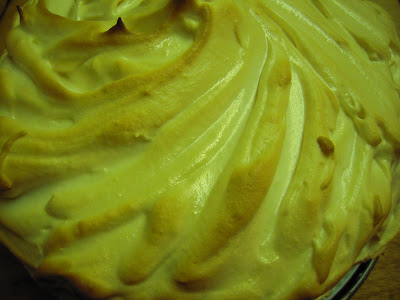 Lemon Meringue Cake, Lemon Meringue Pie, Anything Meringue, is at the bottom of my list of desserts.  Weepy meringue on the lemon pies of my childhood ruined any chance of appreciation for meringue.  Why did meringue have to shove whipping cream, the stuff of my dreams, off a perfectly good pie and ruin it?  That was always my question while scraping it aside.  Eventually Marie Callender made a Sour Cream Apple pie with a topping from cheesecake.  Inspired, my mother topped her lemon pie with her cheesecake topping and never made meringue again. We always referred to it as Sour Cream Lemon pie and moaned complaints when the bridge group ladies weren't on diets, which usually insured at least one piece to split between my brother and I.

Upon leafing through a then newly arrived copy of Rose's Heavenly Cakes several months ago, the beautiful picture of this cake sent chills down my spine.  I have been dreading the eventual making  of it ever since.

Sunday rolled around and I did what I always do before anything else on Sunday mornings; check in with HCB to see if Raymond, Faithy and/or Mendy have posted up cakes.  Most normal people read the Sunday newspaper, do the Sunday crossword or read the Sunday comics.  They don't make a blurry eyed mad dash  to the computer to see how the weekly cake stacks up.  When does a hobby become an obsession?  I'll tell you when a hobby becomes an obsession; when panic strikes because a tried and true recipe (Abelskivers)  is given in volume only without weight measurement.  I've gone over to the dark side of the digital scale abyss.

I started this meringue monstrosity at 3:30 a.m.  putting summer heat induced insomnia to good use.  Mixing up the lemon curd and lemon syrup gave me a boost of confidence.  The cake was surprisingly simple to mix up, thanks to the Wondra Flour dissolving without traces of hidden flour balls lurking in the batter.  The only thing left was the Italian Meringue.   So many better options kept springing to mind.  What if I made a sweetened creme fraiche like Ginger Elizabeth at that soufflee class?  Or what about slathering Haagen-Dazs Lemon ice cream over the top and turning it into an ice cream cake?  Whipping cream!  Faithful, trustworthy whipping cream with some lemon curd mixed in.  But post after HCB post extolled the virtues and sang the praises of Rose's meringue.  Seventeen hours later, at 8:30 p.m., the instant read thermometer and I saddled up for sugar syrup battle.   An hour later the golden meringue topped cake emerged from the oven. 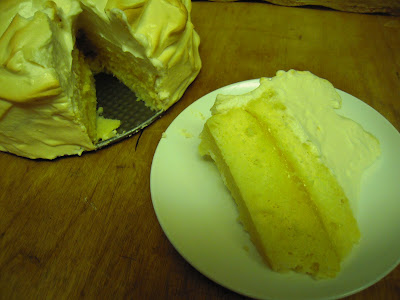 The meringue Rose created for this cake tastes nothing like any meringue I have ever eaten.  The cake is a burst of lemon; not too sweet because I found a leftover quarter cup of sugar which was supposed to go in the batter.  This cake certainly surprised me, which is a colossal understatement.  I didn't even scrape off the meringue.  Baked Alaska is suddenly calling my name.