True Orange Genois is one of those cakes easily listed on a classy restaurant menu. Composed of a traditional genoise cake layered with orange curd and topped with dark chocolate ganache,Rose gave it the slightest twist using Seville oranges. It was spectacular inspiration.
Born and raised in California, oranges were plentiful. My mother's family raised navel oranges, grapes and tomatoes in the central valley. Whenever an impending frost or freeze was forecast, smudge pots were lit, sprinklers pressed into service or giant airplane propellers mounted on poles switched on in hopes of saving the precious oranges from frost bite.
Sevilles, I thought, grew in Spain and were made into Marmalade for toast in England. Imagine my surprise to learn I'd been living amongst them since the age of seven. It seems about a hundred plus years ago, the streets in the state capitol were lined with Seville orange trees. Try as I might, I could not find any local history as to how or why this happened, but there they are, in local pictorial archives of graceful Victorian homes. Sadly, many of the Victorians are gone, replaced with hideous office and apartment buildings. But the Sevilles remain, as they are technically on city property; sidewalk legality and all.
I once asked why no one picked the abundant oranges; "too bitter." Figuring they were a sort of ornamental orange tree, I never gave them another thought, until this recipe. None of the local grocery stores carried them.
I knew they were on the grounds of the state capitol but didn't relish getting arrested picking them. The capitol is surrounded by a 40-acre park in the middle of downtown that sports trees, plants and flowers from around the world. They generally frown on picking so much as a blade of grass. It is legal, however, to gather any fruit that has fallen. Don't think the thought didn't cross my mind of sitting in a lotus position underneath a Seville waiting for a few to fall in my lap. A friend said I should drive the city streets, shimmy up a few trees and pick all I wanted. She even mapped out which streets had the best trees.
Too old for such shananigans, a local fruit warehouse ordered them, after my favorite Italian market gave me their supplier. They make their own marmalade. Curiosity got the better of me and I bought a jar. It's very dark, not the bright orange which typically are found on store shelves. And yes, I paid a fair amount all in the name of research.
"Every year in January, when the Seville oranges in Sacramento start to ripen, Corti Brothers produces its own Seville orange marmalade. Produced according to Mrs. Beeton's 1866 recipe using only fruit, sugar and water, its name is a pun. CAPITAL, since Sacramento is California's capitol and in British English, TOP QUALITY or FIRST RATE. VINTAGE, since it is aged for a minimum of a year before sale. Corti Brothers Capital Vintage Marmalade was first produced in 1980, and sold in 1981. The production for sale now is that of 2005. We also have a small quantity of a "reserve" production, that of 1997, which we are selling for the first time. This is a lot that "got lost" and was just discovered. So much for inventory control!"
I love this store: http://www.cortibros.biz/
This was my first attempt at making a genoise. I once heard it's the cake which tests the skills of a baker as the simple ingredients don't allow much forgiveness. Mine never quite reached two inches.
Making the orange curd was far easier this time around after making lemon curd for Woody's Luxury Lemon Cake. Quite exciting the moment it started to "pool"! Spurred on by forty pounds of Sevilles, I made more than a few batches along with, naval orange and Nigella Lawson's orange/lime substitution for Seville juice. All were equally nice. The Seville orange syrup was simple to make and gave the genoise a lovely additional flavor.
I made this cake twice. The first go around my littlest granddaughter insisted "everything is better with sprinkles" and generously showered the No Longer True Orange Genoise liberally. The second cake was drizzled with unadorned ganache.
The greatest difficulty I encountered was keeping the orange curd from disappearing. Both cakes were well received but the orange curd stole the show, making its way onto just about everything.
I have become very fond of Seville oranges, so much so, I'm on a campaign to give our city's their long overdue recognition with an annual festival, bringing in chefs, bakers and bartenders to showcase creations featuring Sevilles. While Nicola visited giant pineapples in Australia, probably every kid growing up in California during the fifties and Sixties visited a giant orange road side stand for fresh squeezed juice. It's high time they were brought back and a Seville parade down Capitol Mall is just the place to start. See what a little Triple Sec can do! I'll be the lady with oranges atop her head doing the merengue. 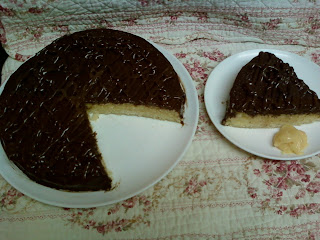 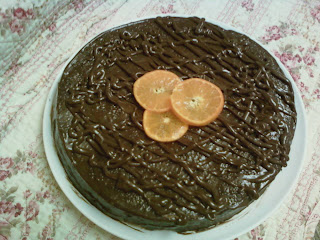 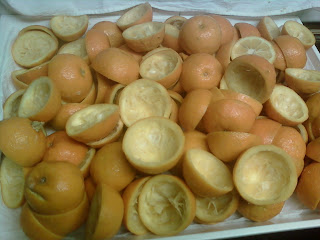 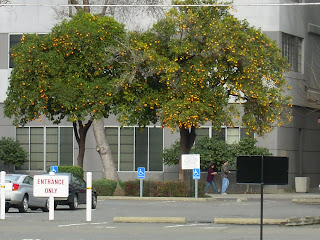 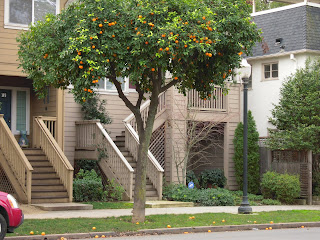 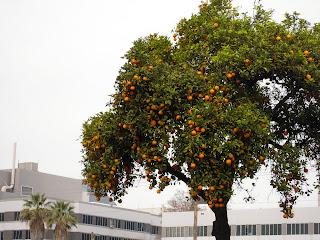 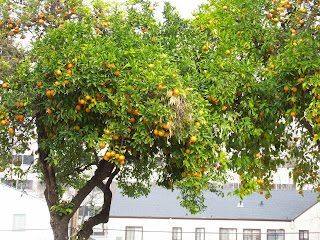 I know, doesn't it just make ya wanna cry? Sevilles litter the streets.