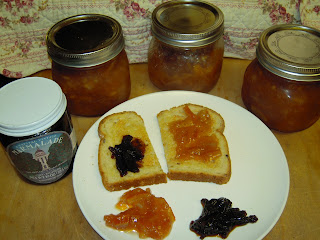 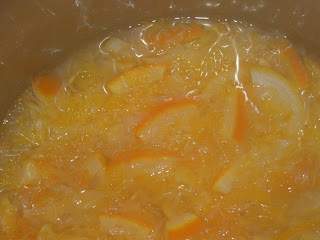 This is the direct result of my newly acquired reputation of becoming a Seville orange fanatic.

Remember that friend who suggested I shimmy up a tree or two?

The very same enrolled in a marmalade making class and graced me with 1.78 pounds of prepared mixed citrus, packed in water requiring explicit pampering. They should have checked into a spa.

As I saw it, the main problem was having no jam making experience whatsoever, but my friend, since the age of twelve, was not to be deterred and handed over the infamous local instructor's directions. It was unique; the sole source of pectin came from seeds stewing along side the fruit in a cloth bag.

"Where are the seeds?" I asked.

"My oranges didn't have any."

As per my usual modus operendi, I made a few bumbling errors.

A) Misunderstood all fruit was to be cooked together and no, they were not for individual types of jam.
B) Forgot about and left the sugar warming in the oven for an hour instead of ten minutes. Luckily no house fire to report.
C) Didn't realize the seeds needed to soak in the water along side the oranges to soften.
D) Cheesecloth and muslin are not interchangable.

Surprisingly, it turned out edible. Quite nice, infact. Still, I didn't want to risk botulism and put two jars in the freezer and one in the frig. Makes me wish I had eaten real marmalade while in England, lo those many years ago, as an au pair. I could have happily slathered it across the malted fruit bread I ate morning, noon and night.

And the Seville festival update? What are the chances an article on the city's Sevilles and the wanton waste came out in the local paper Monday, the very day HCB True Orange Genoise tales posted? The politics involved......I'm on the city councilman's "call back" list.
Posted by Vicki at 9:42 PM