The Holiday Pinecone Cake in Rose's Heavenly Cakes is a sure fire cure for even the most advanced case of chocolate addiction. Making this five pound cake was like living in Willy Wonka's Chocolate Factory. To say it is "rich" would surely elicit a flogging by the Oompa Loompas. This dark chocolate confection bested me and therefore I humbly lay down my fondant covered latex glove.

It was fun making my first ever sponge cake. It got a bit overdone in the newly repaired oven. My granddaughter, nibbling at the trimmed bits, requested the cake be left plain, and perhaps it was a premonition that I might have wisely listened to. Cooking up the chocolate-almond ganache was easy enough. A terrible creature of habit, I used the little mini cuisinart to finely chop the chocolate but sadly realized it could not handle the heated cream. The time had come to face the new eleven cup Christmas cuisinart and its terrifying array of martial arts blades. It was a momentous occasion that only another baker would appreciate. I was surprised how nicely the ganache thickened when cooled.

Fondant is something I've long been curious about. It was extremely dry and took several sprinklings of water until the consistency became smooth and sticky, pulling the latex glove right off my hand. Kneading and smooshing it gave me a good upper body workout. That stuff takes muscles. It was much easier to roll out. I confess the thought of pulling out the pasta machine crossed my mind. 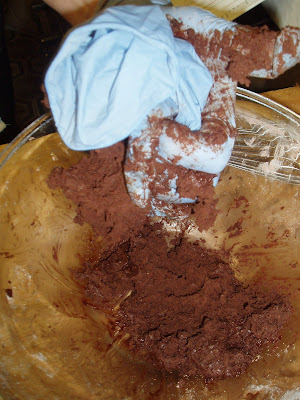 I covered the "pinecone" with the fondant and forgot to spackle the cake with the remaining ganache. Off came the fondant, the ganache trowled on and the fondant re-applied. Since I didn't let the fondant sit overnight, cutting the V's was a bit tricky as the texture was soft.

The thought of running out in the rain for pine needles and red berries went by the wayside and I opted for a powdered sugar blizzard instead. Finally finished, it was brought to my attention that it did not look like a pinecone, but rather a porcupine. Perhaps one should not try to bake after spending a few hours in Chuck E Cheese with a giant mouse running around dancing to the Bee Gees' disco music; a sight I never thought I'd live to see.

I might make this cake again only with a greater ratio of cake to almond ganache and a sprinkling of powdered sugar instead of the fondant to cut down on sweetness. 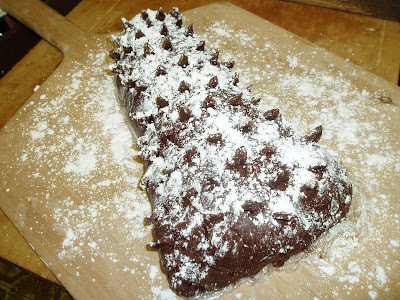 FYI-Curious how leftover fondant handled with a night's rest, I played with it this morning and the V cuts hold their shape much better. Or maybe I'm holding up better after a night's recovery from a certain giant Mouse. For those of you not living in the land of Chuck E Cheese, let me introduce you.....www.chuckecheese.com 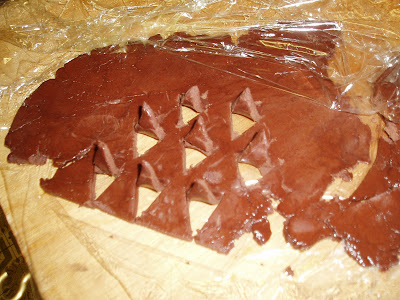