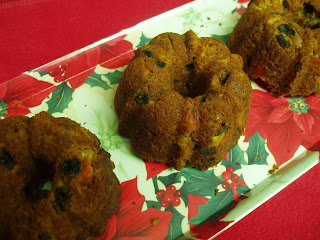 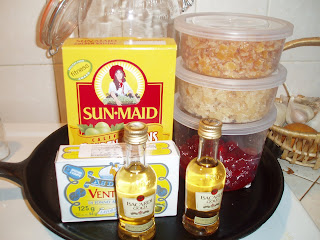 I baked the Fruitcake Wreath from Heavenly Cakes yesterday. Sarah Brightman and Andrea Bocelli might as well have been singing Time To Say Goodbye the moment it came to pour my beloved glaceed cherries, lemon and orange peel into the batter. Very fond of waking each morning to see how the lovely little jewels progressed in their stay of Bacardi rum, I loved watching the peel begin to glisten and soften, though a bit guilty of the carbon footprint. I am in California and the fruit came from Holland.

I must be learning something as this time I actually remembered to turn down the oven twenty five degrees while roasting the pecans and walnuts on a dark tray. Not a burned one in the lot.
It was a bit crowded in my KitchenAid, which must be the smaller version. The final addition of the nuts brought the batter up to the very top. A few pecans jumped ship. I did follow Raymond's advice on not microwaving the butter and letting it come to room temperature only. It was easy peasy. Thanks again Raymond for the heads up.

Out of respect to my fellow bakers, I refrained from reading anyone's postings until now lest I reap the benefits of anyone's mistakes as well as, successes. And y'all know how many mistakes I make each week!

This time I opted not to use a wreath pan because honestly, I could not imagine who I could foist this large a fruitcake onto. I don't know any fruitcake lovers, except now Raymond. I've only tasted one fruitcake in my life that I liked. I used a mini bundt cake pan which held six and an oversized cupcake pan. The mini bundt pan proved a better choice. That blasted instant read thermometer assured me those in the cupcake were not 190 degress and again it lies. They were overdone. I'm hoping getting bathed in more Bacardi might save them.

By far, the biggest surprise is how much everyone likes them. I mean really, they made fruitcake jokes all week long and raised an eyebrow while I cooed and clucked at the macerating fruit. And here's the unbelievable part, they want me to make another batch!
And I give you all my favorite Holiday Fruitcake Story from the blog, Joe Pastry.
---------------------------

You could never interest my father in much that happened in the kitchen. Except when it got to be fruitcake making season, at which point his attention suddenly became focused on baked goods like a Labrador stalking a pheasant. Even now I'm not sure where my parents got their special secret recipe, though Mom and Dad's fruitcake was a much desired item in the neighborhood, even by the Swedish baking queen who lived two doors down. Which was, you know, really saying something.
The process always started the same way, with a trip to the local co-op (still a novelty in the Chicago suburbs in the 70's) to acquire candied fruit in bulk. I can still remember the sense of confusion I felt there, how I could scarcely identify any of the products on the flimsy shelves, and how the people who shopped there smelled funny in a way I couldn't quite put my finger on. Due to all the traffic that time of year, every inch of linoleum within fifteen feet of the bulk section was covered with syrup, to the point that when you were standing directly in front of the candied fruit bins you could barely pry your feet off the floor. Even so, Dad took his time, carefully examining each neon fruit as a vintner would grapes for a cuvée.
When everything had been selected, bagged and paid for, we headed back home to start the production line. My twin sister and I would be seated at our little wooden turtle-shaped table, given plastic scissors, and directed to start cutting the maraschino cherries in two while my parents went at the tougher citrus rinds with kitchen shears. The cutting alone took hours the way I remember it, and culminated in the making of the batter: a thick, brown Christmas-smelling goo that dad mixed in a tub until he was sticky up to the elbows. The panning and baking I don't remember quite as well, probably because my sister and I were in the TV room watching Scooby Doo by then.
After the baking was of course the cooling, and then the critical part: the injecting of the booze. This was where Dad got truly clinical about his cake. There was a time I'd have sworn he wore full surgical garb for the procedure, scrubbed himself sterile, and demanded clamps, sponges and retractors from my mother at regular intervals. More light! MORE LIGHT! Though looking back now I can see it was all in his attitude. He had a special syringe that he used specially for the occasion. A horse needle I think, and every year it seemed Dad had to march down to the drug store and cajole a new plunger out of the pharmacist. The fellow was always reticent to sell him one, even though no one in town could have told you what a junkie was then, and the needle was of a gage you could sip a milk shake through.
Needle in hand, dad injected the fruitcakes with bourbon the way a mad scientist might insert frog DNA into a dinosaur egg. Half an hour later he would emerge from the kitchen and announce that the procedure had been a success, that the patients were resting comfortably, and we could all go home and relax. Whew! Since it was usually bed time by then I don't remember much of the wrapping, only that going up the stairs I could see dad swaddling the loaves in cheesecloth as if each one were its own baby Jesus.
From that point forward the loaves were stowed under the cellar stairs to ripen, which on good years went from early November all the way to Christmas, with Dad turning them at least once a day. Looking back I'm convinced that giving those precious loaves away was harder on him than giving my sister away at the altar. But such is the passion of a dedicated baker, even if it only happened once a year.
Posted by Vicki at 6:03 AM