There I was, happily stirring the batter for Rose's English Gingerbread Cake, wondering why it was not resembling "thick soup". Ah blast, the eggs and milk! I mixed the two together and whisked them into the bowl, wondering, once again, if Rose's recipe could possibly survive in my hands. Poured into cupcakes and the rest into a cake pan, my hopes were high. And I couldn't wait for the delectable aroma to waft round the kitchen, all those lovely spices, syrups and orange marmalade complementing each other.

I waited. And tested. And waited some more before it dawned on me my oven was not working properly. The thermometer hanging off the rack said 150 degrees. Curses! In desperation I hauled out an old Easy Bake oven but even that had seen better days. I contemplated pouring out all the batter into a double boiler and making a steamed pudding but hadn't a clue if that was possible. My daughter switched on the broiler which still worked and got the oven heated enough to barely bake the cupcakes. The cake was a total loss.

In for a penny, in for a pound, I mixed up the syrup and let my granddaughter brush to her heart's content the dubious cupcakes. Once again, Rose came through. I had to fight for a picture before the surviving few were devoured. Granddaughter proclaimed this the "best cake yet" which is saying alot as she ticked off the list from Heavenly Bakers...."except for the lemon curd" and wondered if I could put the syrup on the Upside Down Apple Cake which she deemed in first place until now. 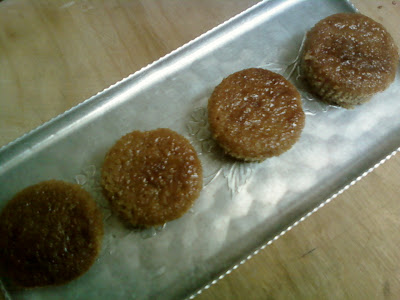 I will be making these again soon. All I can think about is getting down to Costco and picking up a toaster oven a la Mendy.
Posted by Vicki at 10:10 PM