"Lemon tree very pretty and the lemon flower is sweet

But the fruit of the poor lemon is impossible to eat."

Imagine if you will, Elaine Benes on Seinfeld walzing around eating Edward VIII's 100 year old wedding cake bought at auction by her boss, Mr. Peterman. This is how ecstatic I felt after tasting my first batch ever of lemon curd made specifically for Woody's Lemon Luxury Layer Cake. I may also have been humming the Lemon Tree song while perhaps waving a spoonful of the aforementioned lemon lusciousness.

Woody's confection was this week's choice for the Heavenly Bakers. The recipe began by making Rose's lemon curd and I am so glad it did. I will be forever indebted having been forced to learn the art of "pooling." Saturday had already begun with very expensive mediocre lemon curd along side imposter Devonshire cream at a tea room. To end the day on a high note was delightful, even with the angst of wondering if an hour of stirring was long enough. This lemon curd reawakened a long held dream of jam making. It was confidence building.

Sunday the cake batter came together surprisingly well but I was disappointed at the cakes overbrowning even at the lesser baking time. I trimmed the edges and nearly lopped off their tops but decided to leave them.

Making the white chocolate custard was easier than I anticipated, all due to the Instant Read Thermometer I cursed repeatedly only a few weeks earlier. I have to admit I feared pouring the egg mixture into the delicious Green and Black's melted white chocolate, hoping a sweetened batch of scrambled eggs wasn't about to materialize. The best part was having a spoon to lick at every fifteen minute stirring interval.

Pouring the custard base into the creamed butter proved iffy, inspite of the Instant Read assuring me the butter's temperature was perfectly acceptable. I wondered if it was due to the cold Kitchen Aid metal bowl and heated it over hot water as we did for Chocolate Oblivions. It smoothed out and the fluffy frosting began taking shape. The hardest part was waiting two hours for it to become spongy before adding the lemon curd.

It never occurred to me slicing a cake in half could be so difficult, but it was. I remembered seeing my mom use toothpicks to outline the middle for cutting, but it was too late for that. I also faintly remembered it was possible to use dental floss to pull the cake in half, but it was too late for that as well. There was nothing left to do but decide this was going to be a cake fit for the Mad Hatter's Tea Party crossed with a Mary Englebreit Princess of Everything creation.

Frosted and glazed with the remaining lemon curd, the cake was ready for tasting.

I found Woody's namesake exquisite and worthy of wedding cake status. I imagine his t'ai chi Sitfu was very pleased. My family and daughter's office thought it was delicious. 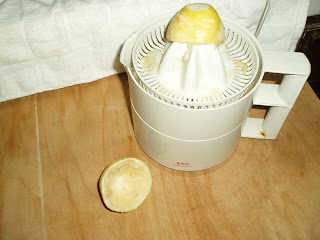 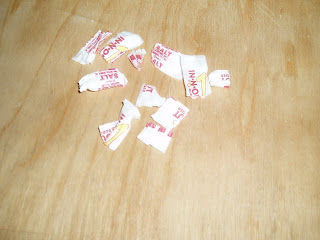 No salt? No problem thanks to leftover In and Out Burger packets 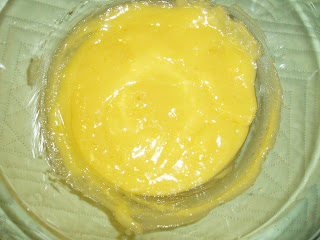 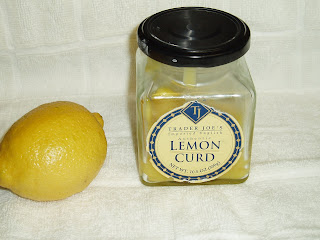 Greatly humored finding this empty jar while looking for the electric juicer and couldn't resist using it to store the six tablespoons of curd. 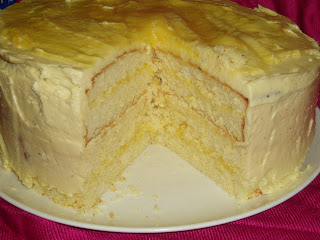 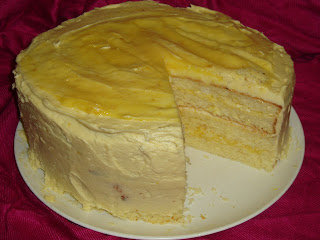