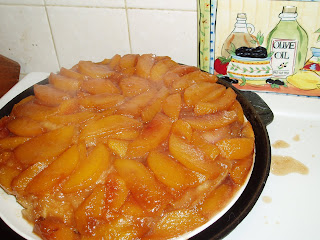 Trader Joe's tempted me with boxes of peaches. They caught my eye stacked by the apples I chose for Rose's Apple Upside-Down Cake. The variety was Last Tango, tree ripened in California and reasonably priced at $4.99 for 12. Whole Foods also had peaches; a large unknown variety. Remembering a few Heavenly Bakers mixed apple varieties I opted to buy both.

This time around I was ready with regular AA butter and noticed it produced more foam than Kerrygold during melting. Peeling the peaches after they sat in the boiling water was a new experience. The Whole Food peaches did not peel easily so I followed Rose's advice and tossed them back into the hot water for a few more minutes. It worked but they felt hard compared to Trader Joe's. The little Trader Joe's peeled easily and were quite juicy.

Both varieties were cling and it did not occur to me choosing a non-cling variety would make for tidier slicing. The brown sugar coated them easier than the apples which I attributed to the lovely peach juice. Later I discovered it was due to the fact I inadvertantly put the entire amount of brown sugar in the bowl instead of removing two tablespoons. Let me say they began releasing their juices at a furious rate. Caramelizing the sugar with the juice produced a significantly larger amount which was not as dense as the apple mixture.

This cake took longer to bake probably due to the excess liquid from my brown sugar faux pas. When turned onto a plate, the entire cake came out with loads of lovely peach caramel running over the rim. The parchment paper stayed in the pan. I whipped the heavy cream using Amaretto instead of Bourbon, thinking it might play off the toasted almonds and almond extract. 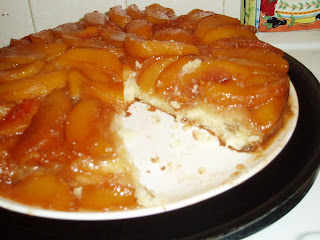 This cake stands up very well to both toppings. The family liked it, although not quite as enthusiastically as the apple. I cannot decide if this is a result of the colder than normal fall weather and furious rainstorms. It definitely is a delicous cake and next summer I will make it again. Perfect for a hot day, perhaps with nectarines, mangos or all three.