This is a lovely cake and suitable for special occasions, however it nearly did me in. I may have to book into a day spa to recuperate.

The first obstacle was finding blanched almonds. It seems grocers do not stock them around these parts anymore. I poured boiling water over raw almonds for one minute, drained and plunged them briefly into cold water. They slipped right out of their skins and Voila! Blanched almonds. Cutting them into slices was a bit tricky but it worked, albeit minus a few burned ones during roasting.

I had a glorious time mixing up the egg mixture, especially after I cracked open the first egg and watched it go down the drain. At least measuring the yolks and whites, something I've never done before, it was possible to see enough was left without warming more eggs. I'm used to separating cold eggs and didn't realize warm eggs are more liquidy, full of little gymnastic tricks. The whites flipped themselves right out of the measuring cup.

Grinding the almonds in my mini Cuisinart, it was iffy knowing when to stop before I had almond butter for lunch. I was happy seeing how it fluffed up with the Wondra flour and in my zeal set it aside, and completely forgot about it.

I creamed the eggs, not certain what an eggy ribbon looked like, then watched the color and texture change. I felt giddy folding in the egg whites. After the first portion of whites I realized something was missing; the almonds and flour. At this point I nearly chucked the whole thing. It was disheartening to make such a silly mistake. There was nothing left to do but pour the almond mixture into the yolk and white blend. I used the funny unnamed tool from the fifties used to fold egg whites into Angel Food cake batter. 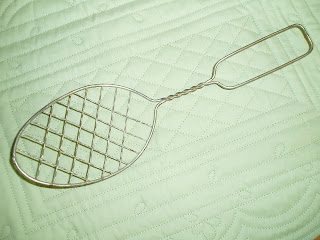 I'm sure the density of the batter suffered as it only filled the pans one quarter full.

My hopes were pretty well dashed by this point. I was astonished to open the oven and actually find the cake puffed up.

The sugar syrup had me slightly baffled because it went from zero to full boil in a blink, skipping the rolling step. The Amaretto was looking really good at this point. In a glass. For me. Not the sugar syrup.

My eldest granddaughter wanted to know what I was painting on the cake. When I explained about the sugar and water mixture she asked why we were eating Hummingbird food!

Flipping the cakes this way and that proved easy enough. I got myself into trouble placing the top layer onto the iced bottom and missed centering it. There was no going back unless this was going to be Almond Shamah Chiffon Triffle. By this time, I could have cared less. I was not liking this cake very much. We had been wrestling for eight hours, Almond Shamah Chiffon and I, and Almond Shamah was winning.

I slathered on the raspberry whipping cream, told the kids to take pictures for posterity's sake and cut into it. They were jumping up and down for a pretty pink piece of cake when it occurred to me maybe giving a three year old Amaretto wasn't the wisest thing. Using the loads of leftover raspberry whipping cream and the cake top pieces I made mini trifles in clear glasses.

Honestly I was so tired I was relieved the baking was over. And then I had a bite. It was yummy. The almond cake texture and raspberry whipping cream go well together. I think it will be even more scrumptious when it has had time to set.

The only conclusion I have come to is Rose needs an unskilled-wanna-be-baker to try out her recipes. The simpleton tester. Like a lab experiment behind one way glass. To see when confusion sets in. I hereby volunteer myself. 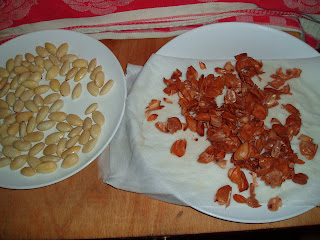 The blanched almonds out of their skins. 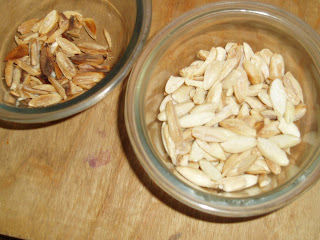 Over toasted and just right almonds 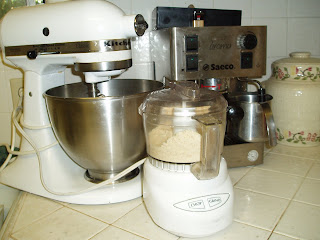 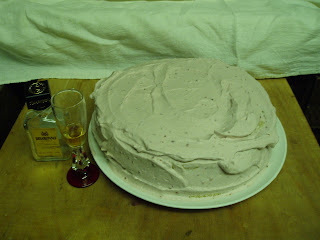 Here it is and there is the half inch of remaining Amaretto. I called "Dibs". 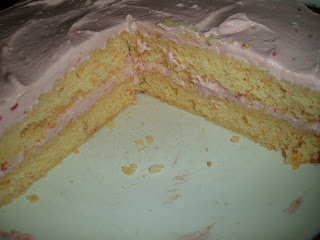