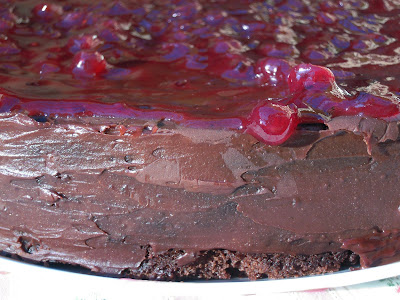 Bernachon Palet d'Or is a stunning chocolate cake.  Draped in ganache made with creme fraiche, it is not cloying sweet.  Rather than the famed chocolate lacquer glaze, this version is drizzled with red current jelly.  The combination plays well together.

I heeded Rose's advice and made the ganache first to give it sufficient time to cool.  Lindt did not have a 60% dark chocolate on the shelf so I opted for half 50% and half 70%.  I have no idea if that equals 60% in the world of chocolate math.

Mixing the cake batter was relatively easy.  The hardest part was smoothing the light and fluffy batter into the pan evenly!  The tricky part was deciding when to pull the cake out of the oven.  There seems to be a very fine line with this cake between done and burned.  I got this one out just in the nick of time and had to trim a few bits round the top edge.  Rather than have it cook further while cooling in the pan, I flipped it out immediately.   The parchment paper was still holding in a great deal of heat so I flipped it back over and removed it.  The cake then cooled quickly.

The texture is not dry but next time I will remove it from the oven sooner.  I had all the ingredients out for the lacquer glaze however red current jelly kept calling my name.  There was not one fresh red current in this town.  The fruit exchange said they are due to arrive on the twenty-fifth.  The garden nurseries sold every current bush in stock.  Had I not been the procrastinator I am, I could have planted one back in January and merrily picked my own red currents.

Everyone loves this cake.  Eldest granddaughter has nibbled three pieces.  For a kid, that is saying a lot.  I think children are the best taste testers when it comes to staples like chocolate cake. 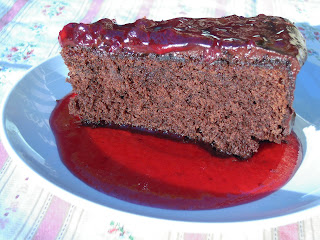