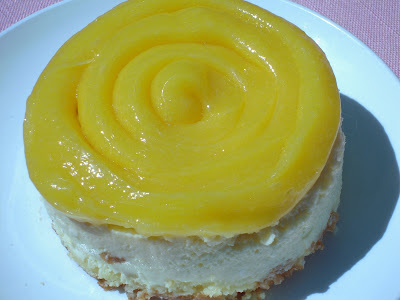 These delightful miniature lemon cheesecakes in Rose's Heavenly Cakes are so light and fluffy they are very nearly a mousse.  The lemon filling rests upon a sponge cake base and is then topped with lemon curd.

Is there no baker out there who will kindly stage a spongecake intervention for me?  I had such high hopes with this one.

For the first time not one errant flour ball lurked in the batter.  A gorgeous golden hued cake emerged majestically from the oven only to reveal this charred disaster when the parchment paper was removed.   After a few surgical slices there was enough char free zone cake to cut out very thin bases. 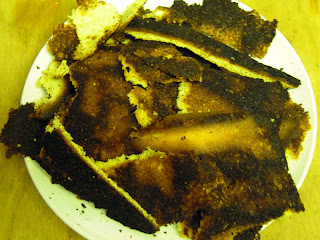 The filling required one and half tablespoons of lemon juice.  I love a burst of lemon.  To accentuate the flavor three teaspoons of lemon zest plus double the amount of juice was added.

I absolutely love making any flavor curd with Rose's simple, foolproof method.  It makes me feel like a jam making earth mother.  My only difficulty is not stopping right then and there to slather it over toast, forgoing the dessert it was destined for. 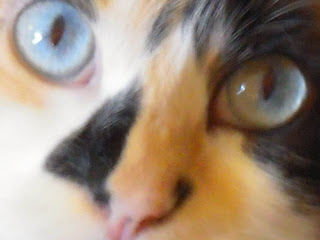 Someone else had designs on the lemon curd as well. Every time I turned my back this little innocent thing jumped on the counter, stealthily stalking my warm bowl of curd.  It was either her or the curd so I put it in the refrigerator.  There was good reason Rose said to pour warm curd over the cheesecakes.  Lemon curd becomes quite thick when refrigerated.  I resorted to piping it over the top.

These were baked in eight ounce ramekins because I did not have enough four ounce, which would have been a better size, although no one is complaining!  It took nearly twice as long to bake. This recipe is easy and now in my "go to" file when a light cheesecake is called for.  Really, it is so deliciously flavored it could easily be served straight out of the ramekins, "flourless" as Rose indicated. 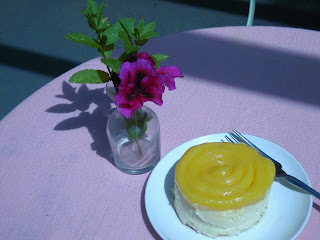