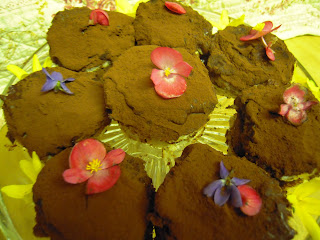 Le Succes is a definite success.   Everyone likes it very much.  Chewy almond cake and smooth chocolate ganache frosting with a certain je ne sais quoi, which happens to be hint of lemon tea. 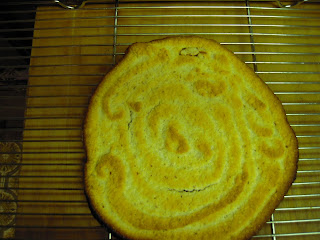 Mixing the batter of eggwhites, ground blanched almonds and sugar was simple enough.  I missed the instruction to smooth the tops before baking, producing disks with resembled funnel cakes at the fair.  Luckily they spread during baking.  And after I was feeling rather proud of myself for laying out the ingredients in bowls, including the divided sugar, in an effort to mend my errant ways. 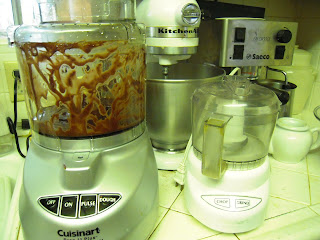 All went well until it was time to face fear, namely The Beast, which still intimidates me.  I tried to stuff a pound of chopped chocolate into the ever faithful mini Cuisinart, but alas, it could not be.  With trepidation, The Beast and I squared off.


The most difficult element in this recipe is the requirement of patience. Letting the ganache cool for three hours   was agonizing.  I should have made the ganache the day before.  There was but one thing to do; errands including shopping at Whole Foods.  That place can make anyone forget about anything, especially with displays of King Arthur's unbleached Cake Flour, which naturally stopped me in my tracks pondering what Rose might think about unbleached cake flour.


Since the discs were on the thin side having burned one to an absolute crisp, I decided to cut out mini ones with a biscuit cutter for individual cakes.  A final dusting of Valrohna cocoa. 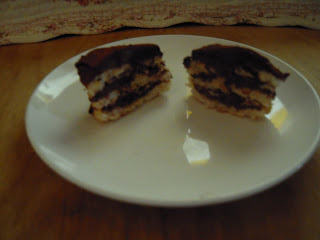 The leftover bits and pieces made for some rather nice truffles. 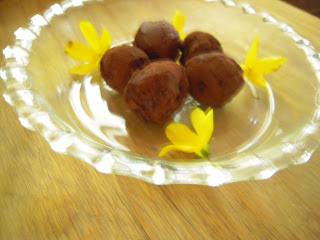 Crumbled cake mixed together with the chocolate ganache and rolled in Valrhona cocoa. There would have been loads more but little fingers prefered the almond cake bits plain and absconded off into the sunset.

This recipe for Le Succes seems adaptable to all sorts of variously flavored ganache.
Posted by Vicki at 7:46 PM